Land And Water In The Northeast

Niagara Falls is on the border of the United States and Canada.
Quite a few thousand years ago, glaciers covered the Northeast. About twelve thousand years ago, when the ice started to melt, it carved the great lakes and the Niagara Gorge.
At the Falls, the Niagara River falls into this gorge which makes the place that millions of tourists come to throughout the year. Yet the fact that Niagara Falls is beautiful is not the whole story, In fact there is a lot more to the story. For hundred and hundreds of years hydropower was used to power and  to make mills and machines run.
Since the Niagara Falls makes hydroelectricity it is the largest producer of electricity in New York state. It generates enough power to light twenty four million 100-watt light bulbs all at the same time! 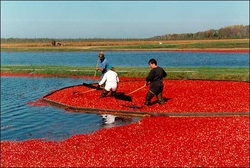 The Cranberry is grown in the Northeast. There are five hundred out of one thousand cranberry bogs. In order to prepare a cranberry bog the marshy land has to be cleared and leveled out. After that people cover it with sand. After that they press new cranberry plants in the sand. While the plants grow, they cover the bottom of the bog. In the Winter people put water all over the bog, that way the water freezes and that way the water or ice protects the cranberries. When it's Spring people drain the bogs, then they are covered all over again to keep the cranberries safe from insects and diseases.