Characteristics of the U.S. Regions

The United States was divided into five regions to help us better understand our country. The states were grouped into regions that share similar characteristics. However, there are some areas in each region that different from each other because our country is made up of many different landforms, a natural feature on our Earth's surface. For example, in the West we see mountains, fertile valleys, shining lakes, and islands.


There are many different types of landforms. Mountains are very high landforms. Plains are large areas of flat land that are covered with grass. Deserts get very little rain.  Canyons are deep valleys with steep rocky walls. Plateaus are large, flat raised areas of land. 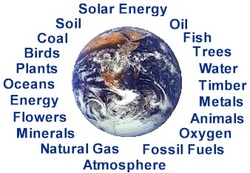 Each region of the United States has natural resources, which can be turned into raw materials that can be used to make other products.
Businesses and industries that grow in each region depend on the resources that are available to them.

People who provide products and services are called human resources.